We used a combination of influencer outreach, pay-per-click advertising and email marketing to increase the size of Zermatt’s corporate leads list and also help them close more big deals.

Zermatt Utah resort was getting a lot of transient bookings for their hotel and resort when they began working with us, but they were looking for a better way to attract corporate clients that would use their world-renowned conference facilities for corporate getaways and conferences on an annual basis. We used a combination of influencer outreach, pay-per-click advertising and email marketing to increase the size of Zermatt’s corporate leads list and also help them close more big deals. 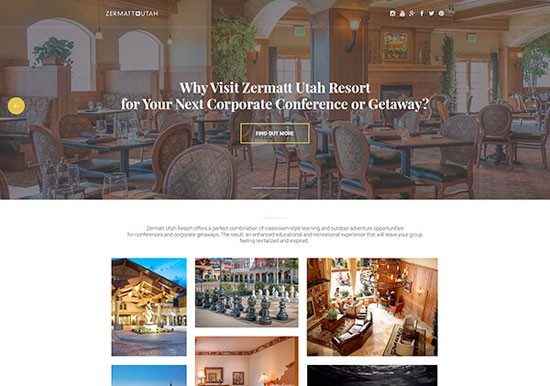 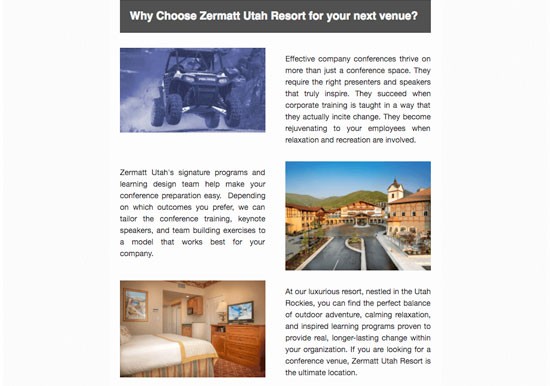 In the early stages of the campaign, our team spent countless hours researching corporations and associations that fit the mold of Zermatt Utah’s perfect corporate client. In just a month and a half, our team was able to build a list of 400 high-quality leads to filter through and then pass over to the Zermatt sales staff. Our team warmed up those leads with a series of targeted email messages before handing them over to Zermatt’s Sales Director.

As part of the advertising campaign for Zermatt Utah, our designers created a couple variations of landing pages. Instead of just focusing on the appearance of the landing pages, our team focused on messaging, calls-to-actions and engaging features that would lead to a higher conversion rate. We also created a feature video that helped engage people that landed on the page.

Our team collected an existing corporate leads list from Zermatt, cleaned the list and began sending out a series of email campaigns to generate interest in Zermatt’s conference resort. After sending just three campaigns, we were averaging a 22% open rate and a .5% click-through-rate, which is relatively high for the industry. Best of all: people were reaching out to the sales staff as a result of the email campaigns.

We wanted to help Zermatt rank in the top few paid ad positions for “conference resorts,” “corporate getaways” and other related terms, so our team put together a pay-per-click advertising program. Within a week of launching the campaign, Zermatt Utah was ranking in the first position for “conference resorts,” one of the most competitive keywords in their category. In a period of two months, Zermatt received over 65 calls because of the pay-per-click advertising campaign. As a result, their sales staff sent out multiple large proposals to corporate customers.

“The Skoshe team helped us show up well in Google paid search and we’ve got a few really high-quality leads as a result.”

LET US BRING YOU MORE CUSTOMERS